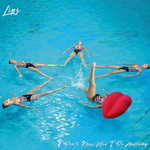 Based in Tāmaki Makaurau, Lips is a four-piece musical project led by Steph Brown and Fen Ikner. Their music finds its roots in the sweaty dance floors of the early 00's new rave scene, the grit of early Beastie Boys LPs and the tender embrace of synth pop. Ultimately resulting in a sound that's a celebration of feeling awkward and embracing it anyway. 11 indie songs that are musically varied (from intimate synth stories, to angular post-punk, to joyful dances in your living room) but grounded by Steph Brown's voice, standing off to one side, back against the wall, messing with the tab of a beer can.

While this debut album has been a long time coming, it's not like Lips haven't been busy. Since their inception in the late 00's they band have released a handful of singles and EPs, won the Silver Scroll Award in 2012 for Everything To Me, toured internationally as musical directors and performers in award winning musical stage play Daffodils, which they later went on to music direct and score as a feature film.