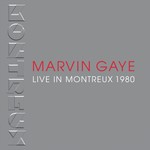 In 1980, the legendary Montreux Jazz Festival once again opened its doors to a world-class line-up, but one of the warmest welcomes was awarded to Motown's premier soul singer Marvin Gaye. As one of the 20th century's greatest showmen, the performance captured on "Live At Montreux 1980" is a stunning display of Marvin Gaye's undeniable power and passion, expressed through his uniquely intoxicating music. For over an hour and a half, we're invited to witness Marvin perform his many hits, including "Got To Give Up","Come Get To This", "Let's Get It On" and "I Heard It Through The Grapevine".