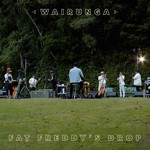 Wairunga, deep in Ngāti Kahungunu country, is a place etched into the DNA of Fat Freddy's Drop who've roamed here for over 20 years; to party, relax between tours, make a song in its honour, and even to get married. Farmed by the Parker family for a century, Wairunga is an oasis of green pasture and native tree-filled valleys that fall away to the ocean below.

Freddy's and their sound and visual recording crews set up on a grass tennis court surrounded by a bush backdrop. The weather was calm but as the performance progressed into night, the elements turned with tempest-like bursts of rain and chill winds. Freddy's dug deep to finish the session - nothing could stop the bush energy and music.