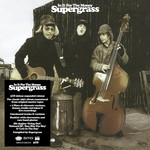 This brand-new expanded edition of 'In It For The Money' features remastered audio from analogue tape on 180g vinyl. The package also includes a 12" single of "Sun Hits The Sky (Bentley Rhythm Ace Remix)" / "The Animal" on 140g white vinyl. The album has not available on LP since its original release.

A. Sun Hits The Sky (Bentley Rhythm Ace Remix)
B. The Animal