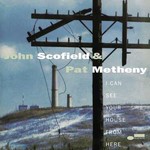 Scofield and Metheny. What more needs to be said? A masterpiece meeting of musical minds, these two guitar virtuosos entered the studio in December 1993 with Steve Swallow on bass guitar and Bill Stewart on drums to create one of the greatest jazz guitar albums of all time. Produced by Lee Townsend, I Can See Your House From Here is an 11-track set of Scofield and Metheny originals including Sco's expansive title track and Pat's rocking "The Red One" and the stunning ballad "Message To My Friend."

The Blue Note Tone Poet Series was born out of Blue Note President Don Was' admiration for the exceptional audiophile Blue Note LP reissues presented by Music Matters. Was brought Joe Harley (from Music Matters), a.k.a. the "Tone Poet," on board to curate and supervise a series of reissues from the Blue Note family of labels.

Extreme attention to detail has been paid to getting these right in every conceivable way, from the jacket graphics and printing quality to superior LP mastering (direct from the master tapes) by Kevin Gray to superb 180 gm audiophile LP pressings by Record Technology Inc. Every aspect of these Blue Note/Tone Poet releases is done to the highest possible standard. It means that you will never find a superior version. This is IT.

B1: Everybody's Party
B2: Message To My Friend
B3: No Way Jose