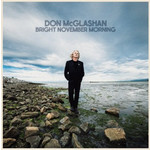 Bright November Morning is Don McGlashan's first album since the renowned Lucky Stars was released in 2015.

Recorded in Auckland, Lyttelton and Vancouver with the formidably talented The Others: Shayne P Carter (Dimmer, Straitjacket Fits) on guitar, James Duncan (Dimmer, SJD) on bass and Chris O'Connor (Phoenix Foundation,SJD) on drums, with cameos from The Beths, Anita Clark (Motte), Emily Fairlight and Hollie Smith.

The album has all the usual brilliant McGlashan touches - from the detail-perfect narratives of local life to the beautiful melodies with detours into something noisier, and on to those infectious choruses.

Out Of My Province

All The Good Times