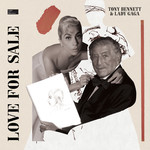 Love For Sale, the new collaborative album from Tony Bennett and Lady Gaga, released as a joint venture between Columbia and Interscope Records is Tony Bennett's last studio recording, showcasing the Cole Porter songbook of classic popular music with both duet and solo selections from both artists.

An album featuring Cole Porter's songbook was an idea the two performers discussed shortly after their first album, Cheek To Cheek, debuted at #1 on the Billboard album charts upon its release in 2015. Recorded at Electric Lady Studios in New York City, Love For Sale features a mix of jazz ensemble, big band and orchestral arrangements. At the time of the sessions, Bennett had already been diagnosed with Alzheimer's, a condition the family made public in a disclosure earlier this year.

Love Is Here To Stay