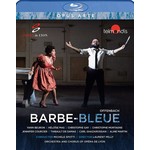 Offenbach composed a hilarious version of the gruesome story of Barbe-Bleue, made famous by Charles Perrault. As an adept of the comically and visually offbeat, the artist Laurent Pelly brings out its impertinent, fantastical universe.

After attracting attention in 2000 with his La Belle Hélène, the stage director Laurent Pelly has already run through a few skirmishes with the world of Offenbach at the Opéra de Lyon with Orphée aux Enfers, before continuing with many other classics by this master of operetta, including most recently the celebrated Roi Carotte. Fantastical, caustic, tending towards offbeat comedy and visual gags, his style, derived as much from the cinema and graphic novels as classical culture, marvellously shakes up the great composers, and is a perfect match for the fantasies of Offenbach.