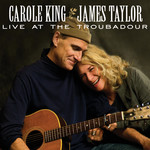 Live at The Troubadour is a live album by James Taylor and Carole King, originally released on CD in 2010, but released here for the first time on vinyl!

In November of 1970, the two rising stars first performed together at The Troubadour in West Hollywood, California. Thirty-six years later, James Taylor, Carole King and members of their renowned original band "The Section" (featuring guitarist Danny Kortchmar, bassist Leland Sklar and drummer Russell Kunkel) returned to the Troubadour for a three-night, six-show run to celebrate the venue's 50th anniversary.

These historic moments are documented in Live at The Troubadour. The remarkable recording features 15 songs and 75 minutes of stunning performances of their collective biggest hits including "You've Got A Friend," "Fire and Rain," "I Feel The Earth Move" and more.

Side A:
Blossom (James Taylor)
So Far Away (Carole King)
Machine Gun Kelly (Danny Kortchmar)
Carolina in My Mind (Taylor)

Side B:
It's Too Late (King, Toni Stern)
Smackwater Jack (Gerry Goffin, King)
Something in the Way She Moves (Taylor)
Will You Love Me Tomorrow (Goffin, King)

Side D:
I Feel the Earth Move (King)
You've Got a Friend (King)
Up on the Roof (Goffin, King)
You Can Close Your Eyes (Taylor)