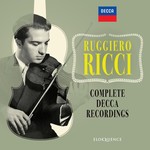 "Certain to cause many a trained fiddler to mop his forehead in amazement". This collection of Ruggiero Ricci's complete Decca recordings on 20 CDs were recorded between 1950 and 1974, and have beewn divided into three sections: Violin and Orchestra; Solo Violin; Violin and Piano.

This set includes a previously unpublished 1954 recording of the three Brahms Violin Sonatas, with Julius Katchen, and includes orchestral works on which Ricci played the obbligato violin parts: Tchaikovsky's Suites Nos. 3 & 4 (Ansermet), and scenes from the 1973 Fistoulari recording of Swan Lake.

Included are lavishly illustrated photographs of Ricci as well as his key conductors and pianists, and fascinating liner notes by Tully Potter based on his conversations with Ricci himself, full discographical information and original jackets.

This boxed set is the most complete tribute ever issued to the fiendish fingers and sublime artistry of a true virtuoso, Ruggiero Ricci: a feast of concerto, solo and recital repertoire recorded by Ricci, collected together for the first time, and including a previously unpublished set of the Brahms Violin Sonatas.

Born Roger Rich to an Italian immigrant father on a Californian army base in 1918, he became Ruggiero Ricci when he was introduced to the New York musical public as a child prodigy violinist. By the time of his debut on Decca - the Tchaikovsky Concerto conducted by Sargent in 1950 - he was an experienced performer and recording artist who had already stunned audiences on both sides of the Atlantic with the solo-violin repertoire he would make his own: not only Bach but also Ysaÿe, Wieniawski and most of all Paganini, whose Caprices he was the first to record complete later in 1950. At the close of the Tchaikovsky sessions, the musicians of the New Symphony Orchestra burst into spontaneous applause.

The new and typically illuminating essay by Tully Potter on Ricci's life and recorded legacy draws on previously unpublished correspondence and sheds light on the background to many of these recordings.

Notable records of Ricci's famous cantabile in concerto repertoire include a hugely influential Paganini album with Anthony Collins and a gripping account of the Sibelius with Øivin Fjeldstad. There are two recordings of the Mendelssohn (1957 and 1974), the first with another 'prodigy', the conductor Piero Gamba, and the second recorded in Decca's Phase 4 stereo with Jean Fournet. He strikes sparks in partnership with Ernest Ansermet for Ravel's Tzigane and the solos in Tchaikovsky's Orchestral Suites. These (Suites Nos. 3 and 4) as well as sections featuring the solo violin, from the Fistoulari 'Phase 4' recording of Swan Lake, are included in this collection.

Decca partnered Ricci with several notable pianists for recital repertoire, starting with his former teacher Louis Persinger and including Friedrich Gulda. Many of these chamber recordings (a Sarasate album, sonatas by Weber, Richard Strauss and Prokofiev) were made not in the Decca studios but in Ricci's home in New Jersey. While he recorded the Second and Third Brahms Sonatas with Julius Katchen in London in 1957, he also taped the cycle of three sonatas at home with Katchen three years earlier. These 1954 performances are issued here for the first time: essential listening for all fans of great violin playing. View the trailer at: https://www.youtube.com/watch?v=bi4pvQ64uvM

"This young American's really remarkable accuracy in playing the most difficult passages is certain to cause many a trained fiddler to mop his forehead in amazement." American Record Guide, July 1951 (Paganini Caprices)

"I look forward to more discs by this first-rate duo … His natural elegance … stands him in good stead in the Prokofiev, where his partner at the piano also distinguishes himself by some most artistic leggiero playing." Gramophone, October 1953 (Prokofiev & Strauss Sonatas)

"There is some truly amazing fiddling here ... combining faultlessly brilliant technique with unusually warm tone … A 'must' for all violinists." High Fidelity, October 1954 (Paganini Concertos)

"In a class by itself aloof from the competing editions. Persuasive lyricism from the soloist, very sensitive orchestral leadership, and gracious sound at all points of its range." High Fidelity, January 1955 (Beethoven Concerto)

"Ricci's ease of execution has already established him as a first-rank violinist despite his relative youth, and this is displayed here to a remarkable degree. Fistoulari and his Londoners play with precision and feeling throughout, and the balance between soloist and orchestra is well-nigh perfect." American Record Guide, July 1957 (Khachaturian Concerto)

"Ricci and Katchen display an impressive understanding of this literature, and the ability to handle the intricate problems of technique, weight, colour and texture with finesse and astute interpretative insight." American Record Guide, November 1957 (Brahms: Sonata No 2)

"In beauty of tone and in technical address Ricci is near the top among the many fiddlers who have recorded these works ... Excellent recording." High Fidelity, March 1958 (Bach)

"This, the first stereo representation of the Sibelius Concerto, is likely to remain unchallenged for a long time ... Ricci is second only to Heifetz in his intrepid technical and virile interpretative traversal." High Fidelity, August 1959 (Sibelius)

"Astonishingly assured combination of virtuosity and poetic sensibility … so fresh and vivacious that it might have just been composed for Ricci himself. His uncanny technical security has never been more electrifyingly demonstrated." High Fidelity, April 1962 (Tchaikovsky Concerto - Sargent)

"Ruggiero Ricci is still a prodigy, but a manure one. A violinist possessed of a flawless technique and a silvery tone, Ricci is today a master of rare interpretative skills, and ills: present recordings bear eloquent testimony in this regard." Stereo Review, April 1962 (Tchaikovsky Concerto - Sargent)

"Ricci's performance is close to perfection throughout, and so is the recording." High Fidelity, May 1965 (Hindemith, Bartók, Stravinsky)

"... the great advantage of this box is its completeness. If you have a vacant two inch gap on your shelves, this box will fit nicely. The transfers come direct from the source material and have been well remastered. The attractive booklet, with the usual Eloquence complement of photographs and iconography, comes with a fine Tully Potter note." MusicWeb Jan 2022