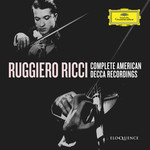 Ruggiero Ricci's nine solo albums taped for American Decca between 1960 and 1970 have now been issued collectively for the first time. This set includes several albums new to CD.

Included are the "superlative" (Gramophone) 1967 recordings of the Bach Sonatas and Partitas, the 'bonus' LP material issued on limited edition prints - an excerpt from Bruch's Violin Concerto No. 1 performed on 15 different violins (issued as an adjunct to 'The Glory of Cremona'), and an interview with Ricci for his Kreisler recording by Victor Alexander.

The notes have been written by Tully Potter, based on conversations with Ricci's friend and editor, Gregory Zayia; with supplementary notes by Ricci himself.

Several legendary but long-unavailable recordings freshly remastered in a comprehensive 'original covers' set of Ruggiero Ricci's recordings for American Decca during the 1960s.

With definitive accounts of the Tchaikovsky Concerto and the Paganini Caprices recorded in 1950, Ruggiero Ricci became established as a Decca artist in the early days of LP. A decade later he began recording for Decca's American division, and between 1960 and 1970 he made nine albums of solo, recital and concerto repertoire which are gathered here in one set for the first time.

Ricci had already recorded some of the solo Bach sonatas and partitas, but in 1967 he made his first complete set for American Decca. Tully Potter's illuminating booklet essay explains how a snowstorm forced Ricci to hole up in a hotel for several days prior to the sessions, and his devoted his time to perfecting his interpretations of Bach.

Ricci was renowned for the astonishing virtuosity that enabled him to tackle the Caprices and Concertos of Paganini without breaking sweat - he became the first great exponent of the composer in the LP era with his Decca recordings - and he remade the Second Concerto for American Decca in 1964 with the Cincinnati Symphony Orchestra conducted by Max Rudolf: one of several albums here receiving its first international release on CD.

The American Decca legacy of Ricci also included several 'concept albums' which soon became collector's items. The set opens with the first of them from 1964, on which the violinist plays The Four Seasons of Vivaldi on four different Strads, one for each concerto, with a string ensemble fielding another ten Strads for a uniquely rich string sound. Two years earlier, Ricci had made "The Glory of Cremona", which saw him play fifteen priceless violins in sessions attended by two security guards. Even these two projects pale beside the astonishing virtuosity on display in "Bravura!", which collects some of Ricci's favourite "knuckle-breakers" by Paganini, Wieniawski and Ernst.

The set closes with another album new to CD, "Violin Plus 1" from 1970, which paired Ricci with five different musicians for a unique display of his versatility, accompanying soprano Lee Venora in Villa-Lobos, taking the spotlight in a Saint-Saëns Fantaisie for violin and harp, and meeting David Nadien as an equal in the Sonata for Two Violins by Prokofiev. As well as one of the last century's most spell-binding technicians on the violin, Ricci was a complete musician, to whom this set pays eloquent tribute.

"He plays most beautifully in both works, displaying a silvery, lustrous tone and a lean, assertive, bravura style." High Fidelity, May 1965 (Paganini, Saint-Saëns concertos)

"Ricci is his customary virtuoso self, yet perhaps even more admirable for his variety of tonal colouring than for his sheer technical dexterity … [an] imaginatively chosen, scintillatingly played, and powerfully recorded program." Stereo Review, March 1966 (Paganini, Saint-Saëns concertos)

"Altogether brilliant performances here. The warmth of his tone on the G string, the clarity of his harmonics, his clean spiccato bowing, and the overall Hispanic quality of his glowing interpretations add up to superlative fiddling." High Fidelity, May 1962 (Sarasate)

"This recording is one that all fiddle fanciers will insist on having … Ricci plays everything with gorgeous tone and impeccable technique." Stereo Review, February 1964 ("The Glory of Cremona")

"The fourteen Stradivari instruments gathered together for this recording produce a fine display of string tone. Ricci brings tremendous zest and bite to the solo part." High Fidelity, December 1966 (Vivaldi)

"This really is superlative playing, the tone full and assured, the intonation in the villainous three-and four-part passages a miracle … A magnificent performance." Gramophone, October 1967 (Bach)

"Ruggiero Ricci is an artist of the front rank … He tackles the music with unflinching vitality and superb assurance - even the intimidating fugue of the G minor Sonata seems to hold no terrors for him, and I have rarely heard this extraordinary movement expounded in so clear and convincing a fashion." Records & Recording (Bach)

"Ruggiero Ricci is a demonic fiddler, and this is a fun record … He performs the sequence of harmonics in the Wieniawski piece in a staggering fashion, and turns himself into virtually a one-man orchestra in Paganini's God Save the King." Stereo Review, October 1970 (Bravura)

"His hand has never been surer, his tone never more beautiful than in these enchanting performances, which are aglow with spontaneity, wit, and sheer delight … a classic matching of interpreter and material." Stereo Review, October 1980 (Sarasate)

CD 7
THE GLORY OF CREMONA