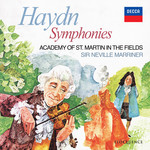 With the delightful original LP cover illustrations, this 'original jackets' presentation collects together for the first time the 33 Haydn Symphonies recorded by Sir Neville Marriner and the Academy of St. Martin in the Fields over a twenty-year period, from 1970-1990. Both the polish and refinement of these performances, as well as the recording quality "of exceptional vividness and presence" (Gramophone), received widespread critical acclaim.

Begun in 1970 with an album of Symphonies Nos 52 & 53, this series of Haydn recordings soon concentrated on symphonies with nicknames (none of them supplied by the composer). They attracted widespread praise for the precision of their playing, the excellence of the Philips engineering and the unassuming polish and refinement of the readings, the only complaint being made that Marriner and his ensemble could not venture into all those other symphonic marvels which happened not to have attracted a nickname. Only towards the end of the series, in 1981, did they yield to this criticism by completing a set of the Paris symphonies with beautifully pointed accounts of Nos. 84, 86 and 87.

However, with 33 individual symphonies eventually recorded, the series covers a substantial fraction of Haydn's legacy. Marriner took a flexible attitude to thorny academic issues such as whether or not to use a harpsichord continuo: 'The most important thing is to be practical,' he said, and the series conveys a meeting of minds across the centuries between two supremely practical musicians.

Some of these recordings last saw the light of day in a 1996 box of the 'named' symphonies. However, the present compilation restores the original couplings with 'original jacket' artwork. The booklet includes many session photographs of Marriner and the Academy in their natural habitat, as well as an enticing array of editorial contributions: from Max Harrison on Haydn's inexhaustible invention as a symphonist, from Philip Stuart on the ins and outs of the ASMF Haydn discography, from Rob Cowan on Sir Neville Marriner as a director of unfailing style and vitality in this repertoire, and a personal memoir from Costa Pilavachi who worked with Marriner in his capacity as A&R manager and later head of the Philips Classics label.

"Marriner's readings are marvels of rhythmic tension and zest, and are beautifully recorded." Stereo Review, May 1972 (Nos. 52 & 53)

"The unrestrained Haydn collector will want this Philips disc simply because it's so good." High Fidelity, September 1972 (Nos. 52 & 53)

"Not only are these performances marvels of elegance, elan and precision, but the recording fits them flawlessly, with just the right blend of space and presence throughout." Stereo Review, January 1978 (Nos. 100 & 103)

"The playing itself is of the very highest standard, and Philips match it with recordings of exceptional vividness and presence." Gramophone, September 1978

"Adjectives as 'delightful', 'lively' and 'stylish' cannot begin to describe the combination of charm and integrity in these performances, which are not merely 'lively' but alive, filled with a wit and brilliance that are Haydn's own." Stereo Review, February 1978 (Nos. 43 & 59)

"Stunning realizations… each of which is invested in full measure with its own particular character. The tempos and instrumental balances are well-nigh unimprovable, and the substantial musical values are never subverted for gratuitous emphasis of the programmatic content implied by the titles." Stereo Review, June 1978 (Nos. 44, 49 & 55)

"It would be difficult to imagine a more attractive or spirited performance … one is conscious of Marriner's characteristically taut rhythmic control and his insistence on the utmost precision of ensemble." Gramophone, July 1979 (Nos. 31 & 73)

"The performances are masterly … Marriner's dynamic range has many subtle gradations. The Allegretto is played with the utmost delicacy and refinement, while in the finale the many inventive colour combinations are well realized." High Fidelity, February 1980 (Nos. 82 & 83)

"The new performances have the same qualities of verve in the quick movements, sensitivity in the slow ones, and immaculate precision throughout that made the older ones so refreshing." Gramophone, April 1982 (Paris Symphonies)

"In matters of tempo, phrasing, rhythmically vital and alert playing, these readings cannot be faulted, nor can the playing of the plethora of soloists headed by Iona Brown." High Fidelity, October 1982 (Nos. 6, 7 & 8)

"The preferred edition on conventional instruments is clearly the recent Marriner, a succulent serving in juicy digital sound. This is the one to get for full justice to the scores' musical content." High Fidelity, May 1983 (Nos. 6, 7 & 8)

"Spirited and well-played accounts of the Paris Symphonies, distinguished by excellent ensemble and keen articulation." Penguin Guide to Compact Discs, 1996

Academy of St. Martin in the Fields
SIR NEVILLE MARRINER