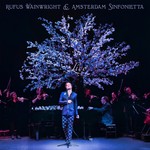 In January 2017 Rufus Wainwright toured with the prestigious all string ensemble Amsterdam Sinfonietta through the Netherlands. Critics and audiences of the ten concerts were enraptured by the intimacy and intensity of the program curated by Wainwright. The concerts reflected the immense bandwidth of Wainwright's musical influences and interests from Verdi Arias to Leonard Cohen and Joni Mitchell, from Rameau pieces to the American songbook and French chanson and from Wainwright's beloved Berlioz to his family's and his own songs, some of them written for this program.

The emotional centrepiece of the album is Wainwright's almost 9-minute version of late Canadian singer songwriter Lhasa de Sela's harrowing "I'm Going In", a song she wrote about her own death from cancer at the age of 37.