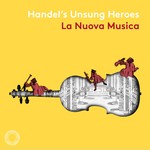 After their acclaimed recording of Gluck's Orfeo ed Euridice, La Nuova Musica and David Bates expand their PENTATONE discography with Handel's Unsung Heroes, in which the instrumentalists of Handel's operas are put centre stage. Traditionally restricted to an "invisible" existence in the orchestra pit, La Nuova Musica's obbligato instrumentalists - violinist Thomas Gould, oboist Leo Duarte and bassoonist Joe Qiu - are now in the limelight. They will stand as equal partners alongside a world-class line up of soloists - soprano Lucy Crowe, mezzo-soprano Christine Rice and countertenor Iestyn Davies - showing how Handel wrote music as virtuosic and lyrical for his unsung heroes as for their singing counterparts. The album includes exceptional arias from Handel masterpieces such as Rinaldo (including 'Or la tromba', the only aria Handel ever wrote for four trumpets and drums), Giulio Cesare (featuring 'V'adoro pupile', an aria that was so luxuriously orchestrated that it completely surpassed the usual expenses for an opera orchestra in Handel's time), Alcina ('Sta nell' Ircana' with its wild hunting horns), Agrippina and Ariodante. Handel's Unsung Heroes is a celebration of Handel's brilliant orchestrations, Britain's best Handelians, as well as the La Nuova Musica orchestra and its very own Unsung Heroes.
La Nuova Musica and its artistic director David Bates are among the most exciting Baroque ensembles of today. Their PENTATONE debut with Gluck's Orfeo ed Euridice was both BBC Music Magazine Choice and Gramophone Editor's Choice in December 2019. Iestyn Davies returns to PENTATONE after having sung the title role in that same release, whereas Lucy Crowe and Christine Rice make their PENTATONE debut.

"This is a stunning collection of Handel opera numbers. For originality, risk-taking and erudition, it towers above its predecessors. It also benefits from its mix of soloists - having chosen the music for its expressive licence, David Bates brings together world-class vocal and instrumental virtuosos to perform it.This project is a heroic achievement for all involved." Recording of the Month
BBC Music Magazine Christmas 2021