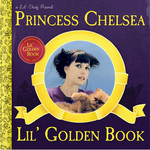 Originally released in 2011, Lil' Golden Book is the debut album by cult New Zealand musician Princess Chelsea and features the surprise global hit "Cigarette Duet" (featuring Jonathan Bree). Lil' Golden Book is a collection of 11 songs that tell the story of growing up in New Zealand, with Chelsea as the central figure. Musically it is a collection of nostalgic synthesizers and chamber pop instruments intricately weaved together sometimes exploding into psychedelia. Her vocals are childlike with plain speak used to deliver dark and funny lines.

Since the release of Lil' Golden Book, Princess Chelsea has gone on to release 3 more studio albums and her music has continued to foster a cult of dedicated fans all over the world. Long out of print, the 10th anniversary reissue is a 180gram gold vinyl, and comes with a collectible A1 poster, reversible cover art, gatefold artwork and lyrics never before available on LP, and a Lil' Golden Book foil spine. This 10th Anniversary pressing is very limited.

Lil' Chief records describes the album as "the soundtrack to an old Disney movie meets Kraftwerk fronted by Enya in a 60s production of Les Mis, in space". There have been further comparisons to a weirded-out version of 60s French pop chanteuse France Gall, even to the avant-garde pop deconstructions of the Residents.

The Guardian warns that "you shouldn't play this stuff to children" and describes Nikkel's music as "venomous fairy tales" and "ravishingly strange".

"Nikkel's dreamy pop is marked by innovative melodies, an immense keyboard sound, and reverb-drenched vocals that balance on the cusp between daydreams and nightmares, making her music a dizzying experience" - Allmusic.