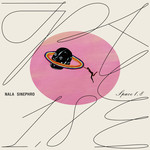 Following electrifying live performances across the London scene, the word quickly spread throughout the UK jazz scene. In 2021 she joined the Warp roster, where she continues to weave her unique sound world.

Sinephro plays pedal harp through analogue and modular synths - the effect gorgeously tidal and woozy, and not unworthy of comparison to Alice Coltrane.

Her music fuses electronica, folk, jazz and field recordings. On Space 1.8, we discover Sinephro's unique sound world as she bends notes and tones, weaving them together to craft a place of solace. Space 1.8 draws from Sinephro's interest in frequency and geometry and is guided by the premise that sound moves matter.

Sinephro collaborates with luminaries of the UK jazz scene on the album.

Space 1.8 is a record occupying an ambiguous state of mind, place and time. It could've emerged from the golden age of healing music alongside the pioneering work of Alice Coltrane and Laurie Spiegel - a lost classic rediscovered many decades later - and yet there's a vitality to its pastel jazz chords and sudden bursts of energy that gives it a sound distinct from the music of any age. Space 1.8 is set to be one of contemporary UK jazz's key releases.

An absolute triumph, Space 1.8 is generous, groundbreaking and completely flooring.

This inspired jazz harpist takes on the universe with a joyous and deeply restorative debut album. You might have believed that Promises, the extraordinary by Floating Points, Pharoah Sanders and the LSO, would have had few rivals this year. But a contender has emerged.
- One to watch, Guardian

Very few records have this capacity to make you temporarily fearless, but on Space 1.8, Sinephro harnesses the power of sound to move and heal the listener in ways that are real, and expansive. - 9/10, LOUD AND QUIET

The brilliant and unassuming debut from the young UK musician and composer is a benchmark in ambient jazz featuring outstanding players and delicately woven arrangements
- 8.3, BEST NEW MUSIC, Pitchfork


Nala Sinephro's Space 1.8 is minimalist, an understated electroacoustic gem perfect for late-night listening. It's one for the pantheon of cosmic jazz classics. - 9, PopMatters