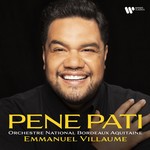 For his debut on Warner Classics, Samoan tenor Pene Pati (Sol3Mio) matches favourite showpiece arias with rarer operatic gems in a programme of Verdi, Rossini, Donizetti, Meyerbeer, Gounod and Benjamin Godard. Pati has been called "a revelation … stunning for his generosity of voice, top notes of apparently invincible power, and alluring timbre, " (Forum Opéra) and praised for his "gleaming, sensuous stream of sound" (San Francisco Chronicle).

A singer of glowing lyricism who establishes an immediate rapport with his audience, Pati hopes that the album will leave listeners with a sense of "warmth, tenderness, and the sincerity of storytelling. To me, this is the essence of opera and the reason why I sing." He is joined by conductor Emmanuel Villaume and the Orchestre national Bordeaux Aquitaine.

Pati is slated to make his big Wiener Staatsoper debut in the role of Lord Riccardo Percy in Donizetti's "Anna Bolena" in February 2022 alongside Diana Damrau, Erwin Schrott, and Ekaterina Semenchuk. The tenor is also scheduled to appear at the Staatsoper Unter den Linden, Teatro San Carlo, San Diego Opera, and Festival d'Aix-en-Provence, among others.

'A generosity of spirit not always to be taken for granted with tenors is in constant evidence on Pene Pati's debut album…His voice certainly has the colour for both the French and Italian repertoire presented here…The sweet-toned elegance and sense of line he brings to the Duke (Rigoletto) in the opening tracks is matched with rollicking vigour when he gets to 'Possente amor'.' BBC Opera Choice of the Month May 2022