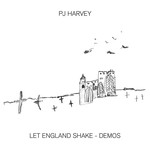 PJ Harvey's revered eighth studio album was written over a two-and-a-half-year period and recorded in five weeks at a church in Dorset during April and May 2010. Harvey's influences for its writing included Harold Pinter, Francisco de Goya, the poets of World War I, Ari Folman, and the Doors. She also researched the history of conflict and sought modern-day testimonies from civilians and soldiers in Iraq and Afghanistan.

Let England Shake was described in a five-star review in The Guardian as "a richly inventive album that's unlike anything else in Harvey's back catalogue...her creative peak." The Daily Telegraph said it was "a profound and serious work from a singer-songwriter at the height of her powers, a meditation on mankind's apparently endless appetite for self-destruction."