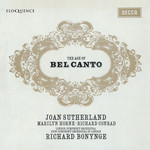 A groundbreaking Decca album celebrating the glory of both bel canto and the voice of Sutherland in her prime, long unavailable on its own, reissued complete with a booklet introduction from Richard Bonynge.

More than a quarter of a century has now passed since Decca remastered 'The Age of Bel Canto' among the first releases in its 'Classic Sound' series of classic albums from the label's history. While the contents of the album have reappeared complete or excerpted in one or another tribute to Sutherland and her art, it is past time for a new generation of record lovers to appreciate once more how curiosity, research, technical finesse and dedication all contribute towards the making of a classic of the gramophone and not just another recording.

'What is bel canto?' Sutherland rhetorically asked the readers of High Fidelity in a 1961 article. 'I believe that it is the essence of opera.' She and her husband, the conductor Richard Bonynge, had some years previously determined to explore and revive the repertoire of an operatic tradition stretching from Handel to Bellini which had in the previous century become almost forgotten. With their performances and Decca recordings, they placed themselves in the vanguard of this revival. 'I am sure that today we are on the verge of a wonderful new era of singing, and that the opera audience wants more than ever to hear great singing.'

A few years later, interviewed in company with Bonynge, she expressed herself more forthrightly on the subject. 'We are entertainers,' she remarked, 'and unless we entertain the public, the purpose of our work is defeated. We're the ones who are paid to do that, and they pay to listen, and they should bloody well get something they can enjoy or else it's criminal.'

'Something they can enjoy' is as much as anything the artistic credo behind The Age of Bel Canto, recorded in June 1963, which brought together obscure items from familiar composers (Mozart's Il Re Pastore, Bellini's La Straniera) with composers hardly more than names in a dictionary at the time. As Richard Bonynge wrote for another reissue of the set, reprinted here: 'Even the Handel revival had barely begun. The young singers were at the beginning of their careers and their enthusiasm shines through these performances.'

Not all the critics at the time were convinced - one of them remarked that the 'long, extremely silly scene from La Straniera can go right back on the shelf whence it came' - but Sutherland's public assuredly was, and the set proved a commercial success in inverse proportion to the familiarity of the repertoire. Now that singers in the early-music world and farther afield have absorbed these pioneering lessons in the importance of stylish ornamentation and shapely legato, Sutherland and her colleagues appear as figures ahead of their time.

"Conrad is probably more adept than any other contemporary tenor in execution of vocal ornamentation. He has a real trill, excellent stylistic sense and an admirable legato … Sutherland is for the most part in very good form. The Piccinni and Shield selections could not be bettered." High Fidelity, January 1965

"There are many truly novel items ... Miss Sutherland is right in her element." High Fidelity, April 1965

"No one could fail to respond to the virtuoso work. The other two singers are equally brilliant." Stereo Review, May 1965

"Sutherland is in fantastic voice throughout … [this set] would demonstrate to anyone who wanted to find out exactly why Sutherland was such a sensation … A great classic of the gramophone." Gramophone, November 1996