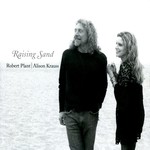 Plant is quick to define 'Raising Sand' as more a band record than a duet record, as it puts the two great singers in a variety of vocal and instrumental combinations - from songs featuring two-part brother-style harmony throughout to solo features for each. Though they come from entirely different traditions, Alison Krauss and Robert Plant create an amazing, unexpected, and entirely new sound when they sing together. The material, ingeniously chosen by Burnett with input from Plant and Krauss, is the crucial thread that guides 'Raising Sand' and gives the two unique singers a forum to interact and equally express themselves.