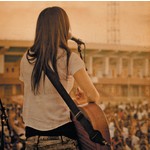 Available on vinyl for the first time to celebrate 15 years since the release of Brooke Fraser's classic album Albertine. It was the songbook that captured hearts at home and abroad, revealing the songwriting power of the celebrated, award-winning New Zealand artist and songwriter.

Albertine charted at #1 when it debuted, becoming her second successive #1 NZ album. Brooke continued to dominate the charts with lead single 'Deciphering Me' and 'Shadow Feet' with both holding #1 all airplay positions. Following the release, Brooke and her live band embarked on an extensive world tour taking the story of Albertine to faraway places such as the UK, Japan, Europe and the US, as well as Australia where the album made a Top 5 ARIA chart debut, going certified Gold. The album debuted on the US Billboard Top 200, introducing America to the exquisite and undeniable work of Brooke Fraser.