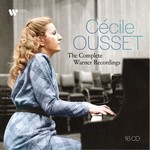 The EMI Classics recordings of Cécile Ousset (b. 1936), spanning the years between 1982 and 1991, would mark her third and most prestigious recording collaboration, launching her, at age forty-six, into the international limelight. Indeed, recognition did not come easily to this grand dame of the piano, who, at the age of fourteen, obtained her prize at the Paris Conservatoire under the tutelage of Marcel Ciampi and began the gruelling rounds at major competitions shortly after: Geneva, Long-Thibaud, Queen Elisabeth and Busoni, as well as the inaugural edition of the Van Cliburn. As a young female pianist, doors remained firmly shut, even with the support of the great Arthur Rubinstein, who personally invested in Ousset's early career after witnessing her performance at the Long-Thibaud competition.

Her rise to international renown came primarily in the 1970s, notably through her recordings for the German Eterna label as well as for Decca France. The year 1982 marked the release of her first solo recording with EMI, a vivid programme pairing Mussorgsky's Pictures at an Exhibition with Ravel's Gaspard de la nuit. Writing in The Musical Times, Cyril Ehrlich lauds a "luminous tone" and a "sense of style", proclaiming, "Cécile Ousset is an exhilarating pianist". Her strong technique, based on the Russian method taught by Ciampi lends her playing a clear-cut and robust tone; her virtuosity is proved incontestable, revealing a mastery of sound, colour and brillance. Works of the French repertoire continued to occupy an important place in Ousset's programmes. To France's greatest modernists, Debussy and Ravel, the pianist would consecrate significant recordings in the second half of the 80s.

Liszt and Chopin were essential components of her repertoire as well. The recording of Chopin's Third Sonata brims with poignant lyricism and heroic sentiment, its excellent pacing just as admirable as the naturalness of the playing, hardly ostentatious but in every way spellbinding. "Like Pollini," observes Gramophone, "the masterful Ousset commands in this work … [her] Chopin CD will give immense pleasure by reason of her indefatigable musical verve."

A survey of Cécile Ousset's acclaimed concerto recordings for EMI may point to a seemingly-logical conclusion - that the pianist was drawn to the unabashedly-virtuosic heavyweights of the concerto literature: Rachmaninov, Saint-Saëns, Liszt, Prokofiev, Grieg, Tchaikovsky…

"Cecile Ousset is an arrestingly ebullient artist...who leaves her own distinctive stamp on everything she plays" Gramophone

Mussorgsky:
Pictures at an Exhibition