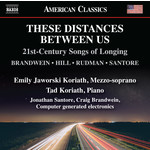 The four American composers on this album have all won recognition for their diverse approaches to contemporary art song. Both Emmy-nominated Craig Brandwein, in his beautiful Three Rilke Songs and Jonathan Santore in Two Letters of Sulpicia use computer generated electronics to enhance the vocal line, while Edie Hill's setting of poems by Amy Lowell exemplifies why her music has been described as 'full of mystery' (Stereophile). The common thread running throughout Jessica Rudman's works is expressivity, and These Distances Between Us charts a cycle that recognizes the precarious nature of personal connections.

Composer Craig Brandwein produced the Naxos album 8.559890 which features Lori Laitman's The Secret Exit and I Never Saw Another Butterfly; 'this is a most moving selection of songs for voice and clarinet, beautifully recorded; music to touch both heart and spirit' wrote Fanfare.

Emily Jaworski Koriath is assistant professor of music at the University of Alabama at Birmingham, where she focuses on undergraduate voice lessons. She is currently compiling a volume on trauma and the voice with colleagues from the Voice and Trauma Research Group. In addition to her ongoing research, she enjoys a thriving performing career as a professional soloist, with additional focus on electroacoustic music for voice, and the work of living composers.