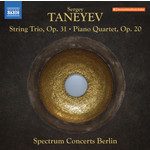 Taneyev was a pupil of Tchaikovsky and a teacher of Rachmaninov and Scriabin. During his lifetime his chamber music was widely considered on a par with that of the great Viennese masters. The String Trio in E flat major, originally scored for violin, viola and the rarely-heard tenor viola, is a mature work with echoes of Mozart and Beethoven. The Piano Quartet in E major is a large-scale, passionate work, sonorous and melodic, with a transfiguring beauty. It has always retained an honoured place in the Russian chamber repertoire.

Spectrum Concerts Berlin has recorded widely for Naxos and has a number of discs. Their recording of Arensky on 8.573317 is an American Record Guide Critic's Choice and a MusicWeb International nominee for Recording of the Year. 'Splendid playing, marked by perfect intonation, ensemble balance, and tonal warmth, conjoined with emotional engagement, interpretive intelligence, and superior recording, add up to a very strong recommendation for this release', wrote Fanfare.