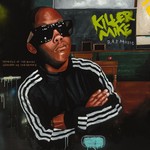 Limited green vinyl. R.A.P. Music, the fifth studio album by rapper Killer Mike, was originally released in 2012 and is finally back in print.

Production was handled by rapper and producer Jamie "El-P" Meline. The album was the first collaboration between Killer Mike and El-P, who would later form the critically acclaimed duo Run the Jewels.