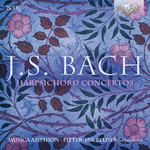 With his seven concertos for harpsichord and strings Johann Sebastian Bach (1685 - 1750) laid the foundation for one of the most popular forms to come: the keyboard concerto. These concertos however are almost all considered to be arrangements by Bach of previously existing works, originally written for other solo instruments. Bach arranged them for harpsichord with the purpose of performing them at Café Zimmermann, where the Collegium founded in 1702 by Georg Philipp Telemann held weekly Friday concerts.

The seven concertos count among Bach's most popular works, and are frequently performed today, by both harpsichordists and pianists.

Pieter-Jan Belder is currently engaged in the new recording of the complete keyboard works by Bach. Belder is one of the world's foremost keyboard players, with an astonishing number of CD's to his name: the complete Scarlatti Sonatas, Bach keyboard works, Rameau, Soler, Duphly, Marais, CPE Bach, Corelli, Purcell, Telemann, the complete Fitzwilliam Virginal Book...to be continued. Critics praise his versatility, his innate feeling for style, his impeccable technique: "Superb keyboard artistry and consummate technique"(MusicWeb), "alive, fresh-sounding and thoroughly engaged.." (Fanfare), "The most vital Bach performances of the moment" (Volkskrant).