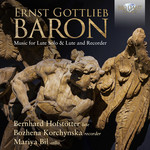 Ernst Gottlieb Baron (1696 -1760) was a German lutenist, composer and writer on music. Baron was born in Breslau into the family of Michael Baron, a maker of gold lace. He showed an inclination to music from an early age, and later made it his profession. He studied lute from about 1710 with a Bohemian named Kohott, and from 1715 attended the University of Leipzig, where he studied philosophy and law. He spent the period from 1719 to 1728 in travels from one small court to another. He visited Halle, Köthen, Schleiz, Saalfeld and Rudolstadt, Kassel, Fulda, Würzburg, Nuremberg and Regensburg, returning in 1727 to Nuremberg where he published his "Historisch-theoretische und practische Untersuchung des Instruments der Lauten", the work for which he is principally remembered. In 1737 he joined the musical ensemble of Crown Prince Frederick of Prussia as a theorbist, where he remained till his death.

This new recording presents works for lute solo, or in combination with other instruments: solo sonatas, a concerto for lute, flute and cello, a concerto for lute and recorder, a concerto for lute, oboe and cello and other works. They show Baron as a master of the "galant" style and offer attractive and original music from a time when the lute was losing ground before it was to disappear completely from concert life in the second half of the 18th century, soon after Baron's death.

Played on period instruments by Bozhena Korchynska (recorder, oboe and flute) and Mariya Bil (cello) and Bernhard Hofstötter (lute), whose previous recordings for Brilliant Classics by Ludovico Roncalli (95856), (Francois Campion (95276) and The Baroque Lute in Vienna (95087)) received excellent reviews. Gramophone about his Weiss recording: "some of the most sympathetic and beautiful Weissplaying yet committed to disc".