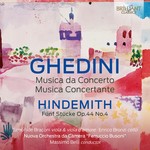 Giorgio Federico Ghedini (1892 - 1965) was an Italian composer. Born in Cuneo in 1892 he studied organ, piano and composition in Turin, then graduated in composition from the Bologna Conservatory under Marco Enrico Bossi in 1911. He worked as conductor for a certain time, then he gave up to devote himself to teaching. He worked as a teacher of composition in Turin, Parma, and finally Milan, where he directed the local Conservatory (1951-1962). Among his pupils the most eminent were Marcello and Claudio Abbado, Luciano Berio, Guido Cantelli, Niccolò Castiglioni, Carlo Pinelli, and Fiorenzo Carpi.

Ghedini had a fascination for the Italian masters of the Renaissance, he transcribed many works by Frescobaldi, Monteverdi and Gabrieli. Although deeply influenced by their musical language he developed a highly personal style, in which the renaissance polyphony and instrumental styles are perfectly blended in a harmonious and characteristic language completely his own.

This new recording presents concertante works by Ghedini: Musica da Concerto for viola and strings and Musica Concertante for cello and strings, vibrant and attractive music of a 20-th century master.

Played with zest and dedication by Simonide Braconi (viola) and Enrico Bronzi (cello) with the strings of the Nuova Orchestra da Camera "Ferruccio Busoni" conducted by Massimo Belli, who already recorded several highly successful CDs for Brilliant Classics with music by Rolla, Viotti, Wolf-Ferrari, Janáček and others.