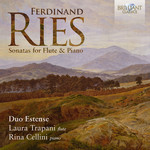 Ferdinand Ries (1784-1838) was born in Bonn and moved to Vienna in 1801, where his life became closely related to that of Ludwig van Beethoven (also a native of Bonn…). Ries studied piano with him, copied his scores and was the interpreter of several new works, notably the premiere of the Third Piano Concerto. Ries also wrote the first biography of Beethoven, an invaluable source of first-hand information.

Ries' style inevitably is modelled on that of his master Beethoven, he was however strong enough to stand on his own. This disc contains four of Ferdinand Ries' numerous sonatas representing a common type of piano sonata 'with accompaniment'. The idea of this type of music is to fill in the
relatively short sound of the keyboard instrument with the sustained sound of a violin or wind instrument, thereby increasing the dynamic power of the music and highlighting its important moments.

This new recording presents the most substantial and famous Sonata Sentimentale, the three flutes sonatas Op. 86, as well as two sonatinas for the pianoforte.