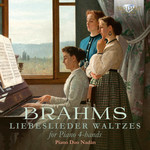 With his Liebeslieder-Waltzes Johannes Brahms (1833-1897) presented a beautiful tribute to the musical tradition of Vienna, the Habsburg capital, a tradition that, starting with the ländler, had taken shape in the waltzes of Schubert and later of the Strauss dynasty. Brahms himself had already composed a successful series of piano waltzes a few years earlier, published as Op. 39. Unlike the latter, the two series of Liebeslieder Waltzes are intended for a mixed vocal quartet with piano accompaniment for four hands, the version of the Liebeslieder-Walzer presented here is an adaptation for piano four-hands by Brahms himself.

The 11 Zigeunerlieder are a good representation of Brahms in his last creative phase, as he seems to turn a last glance at the world of Hungarian folklore - the world to which his old partners such as Joseph Joachim and Eduard Reményi belonged.

The sisters Nadia and Angela Tirino have played together since childhood, and they share that intimate understanding, musical instinct and equality of partnership common to first-class sibling piano-duets. Having both studied at the conservatoire in Florence, they live and work there, teaching and performing, but also joining the jury of distinguished piano competitions around the world. Their recording for Brilliant Classics of
works by Von Herzogenberg received excellent reviews in the international press.