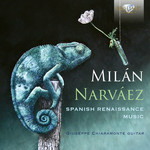 These fantasias derive from the same techniques used by composers of motets and masses, and are conceived as though the vihuela were an ensemble of three or four contrapuntal voices, blending the abstract polyphonic ideas with the idiomatic instrumental possibilities of the vihuela. Other works show improvised traditions, especially the diferencias ("variations") on the formulas associated with the recitation of romances and in improvisations on cantus firmus from well-known hymn melodies.

Giuseppe Chiaramonte is one of today's most outstanding guitarists, a winner of several international competitions. He plays a 6 string guitar by Mario Grimaldi. His previous recording for Brilliant Classics of guitar music by Johann Kaspar Mertz received excellent reviews in the international press.