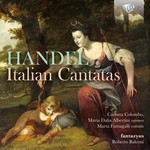 Georg Frideric Handel (1685-1759) had probably encountered Gian Gastone de' Medici, son of the Grand Duke of Tuscany, in Hamburg at some point before heading south to Italy, where he arrived in August 1706, staying in Florence as a guest of Ferdinando de' Medici. Keen to acquire new creative inspiration, the following year the composer decided to visit Rome, where a number of powerful patrons chose to support him, including Cardinals Benedetto Pamphilj and Pietro Ottoboni. It was in Rome that Handel first composed oratorios. In the summer of 1707, he returned briefly to Florence to stage his first Italian opera, Rodrigo. He was soon back in Rome, however, finding the atmosphere there particularly stimulating for the production of his secular cantatas.

Handel's numerous cantatas on Italian librettos largely use one, two or three voices with basso continuo and instrumental accompaniment. Many of them embody elements relating to dramatic structure that were to characterize the arias and scenes of the grand operas he staged during his career in England. The subjects of the Rome cantatas tend to be pastoral, Arcadian, amorous or on occasions celebrative.