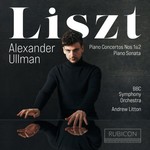 Alexander Ullman was the winner of the 2011 Franz Liszt International Piano Competition in Budapest. He studied at the Purcell School, the Curtis Institute and the Royal College of Music. His teachers include William Fong, Leon Fleischer and Dmitri Alexeev. Alexander's debut album on Rubicon was a recital of great Russian ballet music arranged for piano - Tchaikovsky, Prokofiev and Stravinsky and received enthusiastic reviews from around the world. This album is his first concerto recording - the two Liszt concertos are coupled with the B minor sonata.