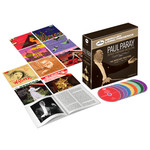 Covering the first five years of their partnership on Mercury, this edition celebrates the legacy of French conductor, Paul Paray and the Detroit Symphony Orchestra. Recorded from 1953 to 1957, during the golden era of the orchestra, this original jacket collection includes both mono and early stereo recordings, remastered from the original sources by Thomas Fine. They are presented chronologically as when first issued.

LIMITED EDITION - ONE PRESSING ONLY

The activities of the Detroit Symphony had been suspended for two years when Paul Paray took over in 1951, and within a season he had raised them to a standard of excellence drawing breathless praise from exacting New York critics such as Virgil Thomson and Harold C. Schonberg. The partnership also kindled a renaissance in Paray's career, and the ten-year period of his directorship was the most successful and fulfilling of his career.
The recently founded classical division of the Mercury label quickly spotted the unique qualities of the DSO/Paray partnership, and signed them up to an exclusive contract which produced several new albums a year and played to the strengths of Paray in both French and German music. Critics outside France were initially taken aback by his swift tempi in Beethoven and other composers, but Paray's approach now seems strikingly ahead of its time.
Covering the first five years of the DSO/Paray albums on Mercury, including both mono and early stereo recordings, Volume 1 includes three spine-tingling Wagner recordings; a fiery account of the Franck Symphony which immediately invited comparison with Toscanini; a Rimsky-Korsakov album which introduced thousands of listeners to the lovable 'Antar' Symphony; the first three volumes of a Schumann cycle which Paray esteemed as his proudest achievement on record; Saint-Saens 'Organ' symphony, which reunited Paray with his childhood friend Marcel Dupré at the new Aeolian-Skinner organ of the Ford Auditorium in Detroit; and Paray's own deeply felt Mass for the 500th Anniversary of the Death of Joan of Arc.
Recordings in this new set have been remastered from the original sources by Thomas Fine, son of the Mercury producer Wilma Cozart Fine and the label's chief engineer Robert Fine. They are presented in this original jacket collection as they were first issued, and accompanied by a richly illustrated booklet which contains essays on the sessions by Thomas Fine and on the DSO/Paray partnership by Peter Quantrill.

"Judging from the first releases by him and the newly resuscitated Detroit Symphony Orchestra, [Paray] should soon come into his own. His reading of this much-played symphony is a thrill from start to finish." High Fidelity, November 1953 (Franck)

"Once again, Paray reveals his mastery at interpreting modern French music. The [Pelléas Suite] emerges as the essence of beauty and simplicity, while La Valse, infused with new life, is made to rise to thrilling dramatic heights." High Fidelity, December 1954 (Fauré/Franck/Ravel)

"A Seventh of strong assertion and iron-clad rhythm, a Teutonic paean to substantial motion … The whole has no more subtlety than the surf when the ocean is violent, but it has the same kind of conviction." High Fidelity, January 1954 (Beethoven: Symphony No. 7)

"Mr. Paray is one of the few universalists who can acquit themselves well of almost any musical problem … This writer is not a student of [Les Préludes], but he knows no recording of it better than this, nor any reason why there should be one." High Fidelity, November 1954 (Schumann/Liszt)

"[Paray] has a way with this music that knows few, if any, parallels among present-day conductors. He makes it live and breathe, infusing it with a magic mixture of subtlety and excitement. Thus, his Sorcerer's Apprentice abounds in drama, suspense and humour from beginning to end." High Fidelity, November 1954 (Dukas/Fauré/Roussel)

"[The DSO] play French music with altogether admirable style and technique, and though the former may be due to Paray's expert coaching, the latter is very clearly their own possession - and a most remarkable one it is." Gramophone, February 1955 (Dukas/Fauré/Roussel)

"This is not balance as we recognize it but it is perhaps better, in a splendour of brass and full identity of the woods beyond a concert-hall experience of the throttled instrumentation of the music. It is the most startling version, and perhaps also the best." High Fidelity, February 1956 (Brahms, Symphony No. 4)

"His interpretations are all well-judged … these players show not only brilliance but a very attractive lightness of rhythm … The swiftly moving but very quiet Prize Song theme is just right." Gramophone, October 1956 (Wagner)

"I couldn't believe my ears, and darted to the turntable to see if it was set by mistake to 45. But it wasn't; Paray really was taking the first movement like that." Gramophone, January 1957 (Beethoven, Symphony No. 6)

"The approach is fresh and full of vitality. The lush melodies and harmonies get plenty of attention, but are never allowed to cloy … The Detroit Symphony, which he has built into a top-notch orchestra, responds magnificently." High Fidelity, February 1957 (Chausson)

"Four of the finest Wagner performances currently available. Paray is one of those remarkable French musicians who can give impressive and stylistically sound accounts of German scores, and the orchestra responds beautifully to his leadership." High Fidelity, February 1957 (Siegfried's Rhine Journey, etc)

"Paray … builds the work from beginning to end, with a truly moving climax resulting … Nowhere do I know of a recording that transmits the tremendous peaks of the finale with such transparency. The disc is wonderful in every way." High Fidelity, March 1959 (Saint-Saëns: Symphony No 3)

"Paray's is one of the best-proportioned versions of the richly romantic Rachmaninoff Second Symphony in recorded form, and the conductor manages to draw superb performances from his orchestra." High Fidelity, March 1964 (Rachmaninoff: Symphony No 2)