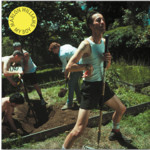 My Boy, the third solo record from New Zealand singer/songwriter Marlon Williams, announces an artist emerging anew. Gone is the solemn, country-indebted crooner with the velvet voice - in his place comes a playful, shapeshifting creature.

Following the release of his second album, 2018's Make Way For Love, Williams toured the world, playing major festivals and collaborating with Lorde, Yo-Yo Ma and Florence Welch. He also forged a fledgling acting career with roles in films The True History of the Kelly Gang and Netflix series Sweet Tooth, as well as a cameo in Oscar winning film A Star Is Born.

My Boy parlays this flush of worldly experience into a vivid record as spirited and kinetic as the unfolding life of its performer. "I've always explored different character elements in my music," says Williams. "And the more I get into acting, the more tricks I'm learning about representation and presentation. To get braver and bolder with exploring shifting contexts and new ways of doing things."

As the pandemic paused global travel, Williams found himself at home in New Zealand, reconnecting with family and friends. Soon new demos and lyrical themes emerged: self-identity and escapism, tribalism and a gnarled family tree and ruminations on the role of masculinity and mateship.

Co-produced with Tom Healy and recorded at Roundhead Studios in New Zealand, My Boy finds Williams' leading a new band through a set of genre-hopping tunes. From the cheery sway of 'My Boy' and chugging '80s noir sheen of 'Thinking Of Nina', to the charging synth of 'River Rival', and the sultry pop jam 'Don't Go Back'. All this sonic and emotional whiplash is intentional, and ultimately My Boy sees Williams having fun, even while interrogating the behaviours of himself and those around him.