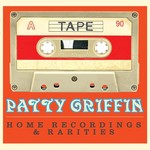 Patty Griffin is back with TAPE, a collection of rare demos and home recordings.

"At some point in the pandemic, I was digging through my own music streaming to relearn some of my own oldies and found something that had been compiled (perhaps by a computed algorithm) that was titled as a 'rarities' or 'deep cuts' collection," Griffin says. "I looked of course, and it was a pretty boring list for the most part. I later dug through some recordings I had done on cheap home recording apps, including my favourite one called TapeDeck which I'm not sure exists anymore. I really liked some of the songs. They were better than I had remembered. I dug around some more and found things from some GarageBand recordings, and then also a couple of things from an in-studio demo session in Nashville that were pretty interesting, including a duet I did with Robert Plant when we first met. It all seemed worth listening to. Back then I didn't think so, but I do now."