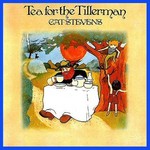 Cat Stevens
Tea for the Tillerman

Now re-mastered, this 1970 album from Cat Stevens is considered to be the best of his career. 'Tea for the Tillerman' presents one catchy song after another, containing deep lyrical content that resounds just as clearly in the 21st century.

"The British singer / songwriter known as Cat Stevens (born Demetre Georgiou) has had many identities in his life: pop star, folk singer, and devout Muslim. Stevens converted to the Muslim lifestyle and adopted the name Yusuf Islam in the late '70s. He then retired from the public eye, but the demand for his music has never waned, having sold over 25 million records!

Now re-mastered, this 1970 album from Cat Stevens is considered to be the best of his career, closely followed by the equally brilliant 'Teaser and the Firecat'. On 'Tea for the Tillerman' he presents one catchy song after another, containing deep lyrical content that resounds just as clearly in the 21st century.

At this stage of his life, the curious Cat was continually seeking answers and reflecting his thoughts about the world in his cleverly crafted pop gems. In "Where Do the Children Play?", the musician questions the necessity of technological advances, while "Wild World" warns of the harsh realities in life. Elsewhere there is the very moving "Father to Son" which deals with the aging process, while the final, self-titled track suggests of a search for spiritual enlightenment.

Sung with tremendous warmth and passion, these well-written songs spoke to many generations of listeners. 'Tea for the Tillerman' deservedly became a huge selling album worldwide and stands as one of the finest popular folk / rock recordings of the '70s."
- GEOFF (30th January, 2008)

Legend - The Best of Bob Marley and The Wailers