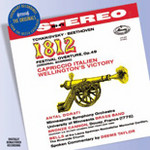 "This most famous of all Mercury records was one of the most successful classical LPs of all time, selling some two million copies in the analogue era. Remastered for CD, it sounds even more spectacular than it ever did in its vinyl format, vividly catching Beethoven's musical picture of armies clashing."
- Rosette (Highest Award) Penguin Stereo Guide

An undisputed classic, originally released on Mercury Living Presence, now given state-of-the-art remastering for its mid-price incarnation in Decca's hall of fame.