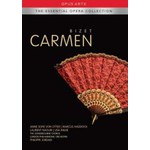 An exhilarating new Carmen from Glyndebourne. Director David McVicar describes Carmen as "the first ever musical", and in his new production, with Anne Sofie von Otter in the title role, Carmen is restored to the original Opera. Comique as Bizet wrote it, stripping away subsequent re-workings which turned it into a grand opera. Philippe Jordan makes his Glyndebourne debut with the London Philharmonic Orchestra, the Glyndebourne Chorus and a cast that includes Marcus Haddock, Laurent Naouri and Lisa Milne. This double disc set also includes extensive extra features on costume, dance, characters and the gardens of Glyndebourne.

"If the idea of Swedish lieder expert Von Otter playing Carmen strikes you as a gamble, perhaps it shouldn't. She has been cast against type before with startling success, as Baba the Turk in "The Rake's Progress," and here she presents a complete portrait even without looking at all like a Spanish gypsy. Her Carmen has loads of overt sexuality - she languidly glides through the Habanera while sucking on a piece of fruit and then a cigar - and she shows plenty of temperament and fatalism tinged with fear later. Haddock convincingly confronts the riddle of a baby-faced Don Jose capable of smoldering violence, while Naouri's cocksure Escamillo sings the Toreador Song in a deliberately banal way - which is what Bizet probably intended. The dark-shaded Glyndebourne production looks claustrophobic on the small screen, but that's not a bad thing as the grip of violent emotions closes in. Jordan's tempos are on the dot, and the fights and crowd scenes are exuberantly directed. Glyndebourne uses the Opera Comique version with dialogue, which brings out the opera's humor and adds depth to the characters' backgrounds. In one of the plethora of extra features generously crammed into this two-DVD set, McVicar and his singers offer unusually penetrating insight into the characters. Better yet, they follow through in this August performance, tapping deeply into "Carmen's" ambiguous soul. ***1/2 Stars."
- Richard S. Ginell, Los Angeles Times, 6/15/03