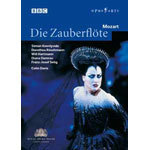 "This production by David McVicar has been rightly lauded, and with such a cast of singers and sound quality to match, I urge you to take advantage of a first-rate venture."
-CLASSICWEB

Includes :-
-Illustrated synopsis of the opera
-BBC feature looks behind the scenes at this production
-Conductor Sir Colin Davis talks about Die Zauberflöte

The internationally renowned Mozart interpreter Sir Colin Davis conducts the chorus and orchestra of the Royal Opera House and a glittering cast in David McVicar's 2003 production of the opera Mozart wrote in the final year of his life, recorded live at Covent Garden.

Sung in German, with English, French and Spanish subtitles.

"Oh, that all opera performances should sound like this one! This is veritably three hours of pure delight and joy. Of course there are some comments to make and parts with which to take issue, but as a whole this production is hard to beat.

Mozart's penultimate opera, with its imagery of Egypt, freemasonry and temples has long been rightly admired and loved. Add to these factors the pomp of the ritual processions, the noble bearing of the priests and masons, and then the gentle humour of the bird-catcher and his inamorata. It all makes for a full recipe for success. And how these performers react to it! From the opening chords, one senses that this will be something to remember. Sir Colin Davis, ever a sensitive Mozartian, chooses sensible speeds, the orchestra respond to his every direction, and above all are in excellent balance with the singers. The singers themselves are all aptly cast; many of them I had not heard, but shall make sure I do so again. Of the main characters, there was not one weak link; Will Hartmann is an excellent helden-tenor and I would like to hear him in Wagner (he won the International Wagner Singing Competition in Strasbourg). Dorothea Röschmann is a very persuasive Pamina and Diana Damreau throws off the coloratura parts as the Queen of the Night with aplomb. Simon Keenlyside seems to relish the role of Papageno, and makes the most of the humorous side, with a markedly lugubrious straight face. Ailish Tynan, from Dublin, as Papagena also has her part to play in the exchanges; rather than appearing as an old woman she is made up as "mutton dressed as lamb" in a synthetic fur coat, short skirt, very high heels and designer-frame glasses. In the second act finale, she is wheeled onto the stage on a divan in an even shorter dress! The supporting parts are also well sung and acted; the three ladies are tuneful and dramatic, and the three boys sing most melodiously, helping in the continuity of the story. Monostatos is made to look suitably like a buffoon (but not as a Moor as in the original plot), and of course Thomas Allen is imposing as the Speaker of the Temple.

So, what about the demerits? These are few, but given the excellence of the performance they are possibly more noticeable. The main criticism is the poor indexing of the disc; yes, there are chapters, but these are very difficult to marry to the action and place in the libretto. No directions are given, not even when the acts are broken down into time zones. If one does not know the opera well, it will be difficult to search and find any particular point. This particularly as the finales to both acts take 25:15 for Act I, and 32:15 for Act II. The overall staging and scenery is minimal as is the current fashion. I have no argument with this but does the set need to be so consistently dim? I realise we are in a masonic temple, but surely there were at least windows even in Egypt; even more where artistic licence is taken. The other upsetting aspect is some dissociation of singing and mouth movements, something I should have thought need not happen nowadays. There is some dichotomy of dress in period fashion, and certainly a clash between Tamino, the priests, Sarastro, Monostatos, and Pamina who are in eighteenth century robes or dress. I have already mentioned Papagena's "outfit"; add to this that Papageno wears a twentieth century suit (although very scruffy like a tramp) and the three boys are in shirts and grey shorts (again untidy). In itself, this is not unduly out of place and one soon gets used to the difference but at first the difference was striking.

The disc has the usual "extras" we have come to expect from DVD issues; in fact, these are very useful for the most part. There is an illustrated synopsis of the opera, which lasts 4 minutes, a BBC feature looking behind the scenes at this production, and then a talk from Sir Colin Davis about the opera. Curtain calls and credits take 5 minutes at the end of the performance. At this point, I should say that I must give full marks to the audience who were quiet and restrained throughout and obviously absorbed in the performance. The opera is sung in German, with well presented sub-titles in English, French and Spanish.

This production by David McVicar has been rightly lauded, and with such a cast of singers and sound quality to match, I urge you to take advantage of a first-rate venture."
-CLASSICWEB

The Turn of the Screw (complete opera)