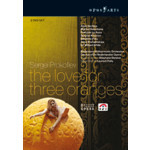 "A reliable ensemble of singers yields the palm, though, to the astonishingly full-blooded playing of the Rotterdam Philharmonic under Denève..."
(BBC Music)

Prokofiev's enchantingly surreal commedia dell'arte masterwork is turned into a spectacular triumph of total theatre in this vital production from the Amsterdam Muziektheater. De Nederlandse Opera has chosen to use the more flexible French libretto of the 1921 premiere, a pertinent choice which has the advantage of accentuating the aesthetic common ground shared by Prokofiev and Les Six.

Stéphane Denève's brilliant musical direction inspires outstanding performances from the soloists and the superb Rotterdam Philharmonic Orchestra, enhanced by the smart, blockbusting staging of Laurent Pelly and the exquisite sets of Chantal Thomas, which propel this feverish fable to great heights.

"Director-designer Laurent Pelly's quirkily stylish costumes and Chantal Thomas's mobile giant playing-cards rule this lavish Amsterdam production of Prokofiev's fairy-tale satire. The spectacle of the first two princesses drooping on the point of death from their citric prisons is briefly horrifying; the love duet between the third, sung with affecting simplicity by Sandrine Piau, and her fast-maturing prince has a surprising truthfulness. A reliable ensemble of singers yields the palm, though, to the astonishingly full-blooded playing of the Rotterdam Philharmonic under Denève..."
(BBC Music)

'A wonderful spectacle… A masterful staging of Prokofiev's Love for three oranges from DNO. … Seldom have we seen such a successful synthesis of music, image and wit on the operatic stage.' Het Parool

'Pelly is the Pierre Audi of Grenoble. He has a reputation for comedy with a contemplative side, which succeeds not only thanks to witches and sorcerers such as Anna Shafainska, Marianna Kulikova and Willard White, but above all to Orange no. 3, out of which springs a splendid soprano - Sandrine Piau.' De Volkskrant

'…a witty and sparkling performance that rushes past your eyes like a whirlwind. The French producer Laurent Pelly and his team have created two hours of pure enjoyment. … Pelly lets the events of the plot unfold in a most inventive fashion, letting them tumble over each others' heels. He creates a surrealistic atmosphere that is miraculous, strange, witty and above all gripping. … The splendidly playing Rotterdam Philharmonic Orchestra hustles along with the difficult score as if it were nothing; thanks to conductor Stéphane Denève, the stage spectacle is perfectly accompanied. This, in combination with the excellent singers, makes this production a true and rare feast for both eye and ear.' Algemeen Dagblad