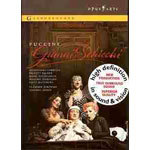 "A delightful humorous and warm production of the final part of Puccini's Il trittico."
(MusicWeb July 2005)

MUSICWEB RECORDINGS OF THE YEAR (2005)

"A delightful humorous and warm production of the final part of Puccini's Il trittico."
(MusicWeb July 2005)

"This 2004 Glyndebourne production was staged with another one act opera - Rachmaninov's The Miserly Night. Clearly there were practical considerations. For a start both operas could utilise more or less the same set thus saving time and money in scene changes in the small environment that is the Glyndebourne opera house. Annabel Arden and Jurowski in their interviews point out certain similarities between the two operas including the fact that they both feature rich old men who disinherit their families: one dying at the end of the Rachmaninov and the other at the beginning of the Puccini. I do feel though that they make heavy weather when they attribute too dark an interpretation to the Puccini story-line suggesting something of a political statement, assuming something of a pre-taste of Mussolini's Fascism; hardly, considering Gianni Schicchi was composed as early as (1917-18). Gianni Schicchi is, after all, essentially a black comedy after an episode in Dante's Inferno in which reference is made to a Buoso Donati and a Gianni Schicchi, encountered in hell. Indeed, it will be recalled that the last words of the opera, directed to the audience by Schicchi, confirm that he has been sent to hell because he has cheated Donati's relatives of their inheritance even though that old man had chosen to leave his wealth to a monastery."
(MusicWeb)