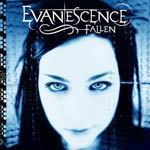 "Fallen" is the long-awaited album release by Evanescence.

Evanescence is a talented quartet from Little Rock, Arkansas, that sound like no one else. Their emotional, ethereal work of undeniable potency is guided by the heavenly vocals of singer Amy Lee - yet their music can best be described as epic, dramatic, dark rock.

The first single "Bring Me To Life" featured prominently in the "Daredevil" film and soundtrack.