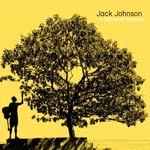 Jack Johnson
In Between Dreams

In the past five years, Jack Johnson has gone from filmmaker, shooting and scoring his 16mm surf films to a well-known singer-songwriter. After spending the remainder of 2003 on the road in support of On and On, and slowing down in 2004 to welcome his new baby boy, Johnson is now ready to release his third, and most musically upbeat release to date, In Between Dreams.

Raised on the Hawaiian island of Oahu, Johnson practically began to surf as he began to walk. As the youngest of three wave-riding brothers and a long-boarding father, most of Johnson's life lessons were learned in the water. With Pipeline in his front yard, Johnson started surfing the legendary wave at age twelve, at seventeen was invited to surf in the Pipe Masters competition, and one month later suffered a surfing accident which kept him out of the water for three months. Although Johnson had began playing guitar as a young teen, it was these land-locked months that allowed Johnson to hone his guitar skills and find influences in a wide range of musicians from Cat Stevens to Fugazi.

At eighteen Johnson left the islands to study filmmaking at the University of California of Santa Barbara. After graduating in 1997, Johnson began a year-long adventure around the world with old surfing friends Chris and Emmett Malloy. The result was the acclaimed 16mm surf film Thicker Than Water, hailed as a return to the purist beauty of early surf cinema, which Johnson co-directed and shot. It was during the scoring of the film that Johnson found his musical voice. Before its release in 1999 Johnson's soulful folk tunes, inflected with blues and hip hop flavorings, soon began circulating as bootlegs in all corners of the global surf community.

At this time Johnson met fellow surfer Garrett Dutton (aka G. Love) who recorded Johnson's "Rodeo Clowns" for the G. Love & Special Sauce disc Philadelphonic also released in 1999. The recording quickly gained radio airplay and Johnson's reputation as a musician was building beyond the surf community. Despite offers to sign a record deal, Johnson chose to escape to the South Pacific to film his second surf film, The September Sessions. By the time Thicker Than Water was named Surfer magazine's Film of the Year and its follow-up The September Sessions nabbed the Adobe Highlight Award at the ESPN Film Festival, Johnson's bootleg tape fell into the hands of musician Ben Harper and his manager/producer J.P. Plunier who helped Johnson to make a record.

In January of 2001, Johnson's full-length debut, Brushfire Fairytales was released on Enjoy Records; an upstart indie label founded by veteran A&R man Andy Factor and Plunier, who produced the recording. Brushfire Fairytales was an impressive debut on numerous levels: From the opening "Inaudible Melodies"-which seemed to boil Jack's personal philosophy down to a chorus of "Slow down everyone/You're moving too fast"- to the anthemic "Flake," Brushfire Fairytales turned many people across the nation onto Jack Johnson. While opening for Ben Harper's four-month U.S./Australian tour in 2001, Brushfire Fairytales started to build momentum and spread like wildfire among the enthusiastic, music-minded Harper crowd. By the fall, Johnson, along with drummer, Adam Topol, and bassist, Merlo Podlewski, were selling out their own club shows. Within a year of the album's release it had sold 100,000 copies, in January 2003, it went platinum.
In May of 2003, Johnson released his sophomore album On and On, which was produced by Mario Caldato Jr, best known for his work with the Beastie Boys, and featured the same line up as Brushfire Fairytales: Jack on vocals/guitar, Adam Topol on drums, and Merlo Podlewski on bass. On and On mixed heartfelt ballads of love and simple joys with more serious subjects of materialism, industrialization, school shootings, offshore oil drilling, and war. The inner truth and social commentary that was evident in Johnson's early songwriting on Brushfire Fairytales matured with On and On.

On and On's release launched Johnson's newly formed Brushfire Records label and garnered sales of one million within its first year. Also during that year Brushfire Records welcomed Jack's old friends G. Love and Donavon Frankenreiter, a professional surfer/musician, and released the soundtracks for Johnson's surf films Thicker Than Water and The September Sessions.

On March 1st 2005, Johnson releases his third full length recording In Between Dreams. Johnson along with Topol and Podlewski bring acoustic sing-a-longs full of smartly embellished strumming and solid basslines to create the hypnotic, blues and funk-inflected groove flowing through the album. In Between Dreams was recorded in Hawaii and Los Angeles and was produced by Mario Caldato, Jr. and engineered by Robert Carranza, the same duo at the controls for 2003's On and On. In Between Dreams also features contributions from Jack's friend Zach Gill of Animal Liberation Orchestra on piano and accordion.
The songs on In Between Dreams are nostalgic and romantic. "Better Together," with its boxes of photographs awash in "sepia-toned lovin'," is a love song Johnson penned for his wife, Kim: "It's not always easy and sometimes life can be deceiving/But I'll tell you one thing, it's always better when we're together." The upbeat "Staple It Together" reminds us to roll with life's punches, while "If I Could," quietly laced with melodica and hand drums, is a heartfelt goodbye to a friend: "I heard some words from a friend on the phone that didn't sound so good/The doctor gave him two weeks to live/I'd give him more, if I could." Some tracks, like the accordion-filled "Bella," predate Brushfire Fairytales, while others, like "Crying Shame," were written just as the album was being finished. The first single track, "Sitting, Waiting, Wishing," is about a friend's amusing pursuit of a girl.

Having started playing music at his family barbecues and atop boats on far-off surf trips, it must be a touch surreal when Johnson finds himself traveling the world with his band, performing on television shows, and playing to sold-out amphitheatres. But the reality is that Jack Johnson has accomplished an impressive amount over the last few years as an artist, filmmaker, musician and now as a father. His third full-length release In Between Dreams delivers his signature sound that fans around the world have grown to love, in an upbeat collection of songs that will get everyone to sing along.

Fight for Your Mind

Everyone Is Here
more suggestions…