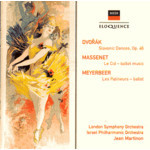 "In short, masses of fun all round. If the Israel Philharmonic yields to the LSO in sheer international heft, it gives just as much of itself in spirit. A life-enhancing disc."
(MusicWeb)

Jean Martinon (1910-76) was not only a successful conductor but also an accomplished composer and his musical intuition and fine ear for detail is evident at every turn in these recordings. This release will achieve cult status, as did the original recordings, made in 1958 (Massenet, Meyerbeer) and 1959 (Dvorak). The French works were recorded by the legendary Decca producer John Culshaw, and for those not familiar with this music, it is scintillating, charming, tuneful, and, despite the age of the recordings, sonically thrilling. Likewise, Martinon and the LSO inject plenty of verve into the Slavonic Dances (originally recorded by Decca for RCA at a time when the two companies had a mutual arrangement).

Ballet at the Opera (from Eugene Onegin, Oprichnik, The Maid of Orleans, etc)
more suggestions…