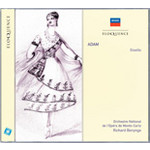 "This may not be the greatest ballet music ever, but it is tuneful and enjoyable and the performance and recording more than adequate, especially at such a reasonable price"
(MusicWeb Aug 2007)

Following a stream of requests - not least from the conductor himself! - Universal Australia is releasing for the first time on CD internationally, Richard Bonynge's first (1967 / analogue) recording of Giselle. The enchanting score has even more spontaneity and bounce than Bonynge's later digital remake for Decca.