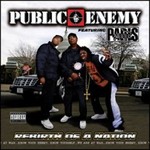 In conjunction with rapper and producer Paris, 'Rebirth of a Nation' is an exercise in controlled chaos from arguably the most important hip hop group ever!

"We're in the midst of a pop progressive era, thanks to the likes of Dre, Pharrell and Timbaland - mainstream men literally pushing harder than the next one to find the most curious, throttling sounds to ground a pop record. Public Enemy remain one of the few acts that can stand up to the sonic innovations of those dudes - and in most cases still eclipse them.”
- Pitchfork

Public Enemy rewrote the rules of hip hop, becoming the most influential and controversial rap group last century and for many, the definitive rap group of all time. Selling millions of records worldwide along the way and building from Run DMC's street oriented beats and Boogie Down Productions' proto-gangsta rhyming, Public Enemy pioneered a variation of hardcore rap that was musically and politically revolutionary, and fronted by stars, in Chuck D, Flavor Flav and Professor Griff. Now they throw us a curveball in the shape of this special project, created in conjunction with rapper and producer Paris.

Why would one of rap's most legendary lyricists recruit another emcee to write him an album full of rhymes…? According to Chuck D, it's an experiment he's been wanting to try for some time, finally realized on the blistering 'Rebirth Of A Nation'. Veteran Bay Area rapper, producer and activist Paris not only helped write the music but also wrote "98%” of Chuck's verses!

'Rebirth Of A Nation' is released on Paris' own Guerilla Funk label and deals with vociferously militant leftist themes that will be familiar to Public Enemy fans, while Chuck's still impressive flow loses no venom through voicing another's thoughts.

The opening cut 'Raw Sh*t' features MC Ren of legendary West Coast gangsta-rap pioneers N.W.A., and addresses a litany of issues from Iraq to US poverty and racism, with Chuck D sneering "Don't tell me that the war is won”. Minister Of Information Professor Griff appears on the rock-influenced title track, while Flavor Flav is featured throughout. Also featured on 'Rebirth Of A Nation' are Dead Prez, Kam, Conscious Daughters and T-K.A.S.H. [of The Coup].

'Rebirth Of A Nation' is an exercise in controlled chaos and alongside the incredibly resilient Public Enemy, Paris pulls out all the stops to present his finest work yet, for what is arguably the most important hip hop group ever!

"Chuck D and Flav's familiar voices are a much needed reminder of what 'conscious hip hop' once stood for."
- hiphopdx.com

Power To The People and The Beats: Public Enemy's Greatest Hits