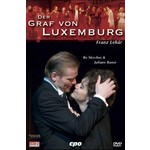 Franz Lehár's The Count of Luxemburg, one of his most popular triumphs, was first produced in 1909, at the Theater an der Wien, only four years after his greatest success, The Merry Widow. It ran for 299 performances in Vienna and quickly became very popular around the world's stages. The London production, around that time, was enjoyed by King George V and Queen Mary, who attended its first night. It was remembered for the magnificence of its Terraine sets and Comelli dresses. It is interesting to note also that talking to an American reporter in Vienna in 1909, Lehár observed that Viennese producers do not "take liberties with an author's book or a composer's score … "