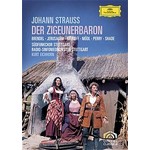 "Beautifully filmed on location in Hungary with a fine cast of singers, this production is a delight."
(MusicWeb August 2008)

"Jerusalem, in fine voice, makes a charming, debonair Gypsy Baron, impressing from his first aria as he guilelessly sings (with the chorus) 'Als flotter Geist' with the sensual Viennese waltz refrain, 'Ja, das alles auf Ehr' (Yes, I swear it's all true!). He is very well partnered by Ellen Shade as Saffi who stirs gypsy blood in her czardas. They both are sublime together in their show-stopping duet, 'Wer uns getraut?'. Beautifully filmed on location in Hungary with a fine cast of singers, this production is a delight."
(MusicWeb August 2008)

"…director Arthur Maria Rabenalt… makes the most of location shots of Hungarian landscapes to create a convincingly fast-moving and musically invigorating film out of material that on stage risks seeming slightly turgid." Gramophone Magazine, October 2008

Johann Strauss was nearly 60 when he completed Der Zigeunerbaron, which became alongside Die Fledermaus his second masterpiece

Among the leading names of the stellar cast are Wolfgang Brendel, Ivan Rebroff, Janet Perry, Ellen Shade and Siegfried Jerusalem as Sandor Barinkay and Kurt Eichhorn conducts the Radio-Sinfonieorchester Stuttgart

"Director Artur Maria Rabenalt...has engaged lovely voices and good actors, got a slimmed-down Ivan Rebroff to sing and play the handsome Prince Zsupan, set the scene in a picturesque landscape and has certainly given many people great pleasure with this new production." (Berliner Morgenpost)