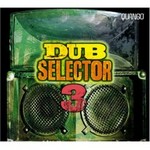 The third instalment of the skankingly heavy 'Dub Selector' delivers an unrivalled collection of the best in the contemporary dub scene from around the world. "The re-launched Quango has the magic. The deep vibes can't be denied...

"After years of enlightening the dance music scene to the global groove, Quango re-emerges to bloom into the new century.”
- XLR8R

"The re-launched Quango has the magic. The deep vibes can't be denied.”
- BPM Culture

The third instalment of the skankingly heavy 'Dub Selector' delivers an unrivalled collection of the best in the contemporary dub scene from around the world. From Jamaica, Germany, Sweden, USA, Denmark, France and of course New Zealand, the modern sounds and influences of dub are felt from all four corners of the globe.

As usual, this volume of 'Dub Selector' is compiled by Quango label founder and indie music champion Bruno Gaez. Chock-full of the biggest new school producers like Boozoo Bajou, Fat Freddy's Drop, Freddie Cruger, Djosos Krost and Cottonbelly, who are all groundbreaking artists, accredited for moving the sound of electronic dub forward.

Dub enthusiasts as well as fans of dancehall and reggae will enjoy the evolution of these new sounds. So sit back, unwind, stoke up a lil' of whatever it is you like and enjoy the vibe of the Selector!

The story of the Quango label begins with a battered mixtape made by Bruno Gaez that fell into the hands of Chris Blackwell, founder of Island Records and Palm Pictures – aka the man who signed Bob Marley.

The forward-thinking global grooves that scratched their way through the speakers inspired an imprint deal for Quango via the Island label from and then a co-venture with Palm Pictures. Their eclectic repertoire is host to a living history of breakthrough artists and global-centric compilations tapping every galactic time zone. With more than 50 records released, Quango has championed the emerging electronic sounds from around the globe with a diverse roster of artists and a catalogue of concept compilations. And now they are re-birthed and rise like a phoenix from the ashes…